Home / Simon Wren-Lewis / The evidence, and the consensus among economists, against Tory fiscal policy has grown over time

The evidence, and the consensus among economists, against Tory fiscal policy has grown over time

by
Simon Wren-lewis
My articles My siteAbout meMy booksMy videos
Follow on:Twitter
Summary:
This is an old theme with two new pieces of information. The first comes from a surveyof US economists, the majority of whom are academics (HT Jonathan Portes). As UK macro very much follows US macro, the numbers for UK economists are likely to be similar. This survey covers many issues, but I want to ...

Scott Sumner writes What does it mean to say that something is inflationary? (part 2)

Scott Sumner writes What does it mean to say that something is inflationary?

They lie about everything else, so why is the economy different?

This is an old theme with two new pieces of information. The first comes from a surveyof US economists, the majority of whom are academics (HT Jonathan Portes). As UK macro very much follows US macro, the numbers for UK economists are likely to be similar. This survey covers many issues, but I want to focus on three questions in particular.

The first is as follows: “Fiscal policy (e.g. tax cut and/or expenditure increase) has a significant stimulative impact on a less than fully employed economy”. Here economists in 2021 overwhelmingly agree with this statement. The ratio of agree to disagree is 94/06. This consensus is greater than similar surveys in 2011 and 2000, but only slightly so. This is hardly surprising, as it is what we teach undergraduates and graduates. The influence of those macroeconomists based around Chicago who thought otherwise was always marginal.

This question alone is insufficient to imply that focusing fiscal actions on the deficit rather than assisting a recovery was wrong. It just says that an austerity policy will tend to reduce output, but that may be a price worth paying to reduce the deficit. This bring us to a second question: “A large federal budget deficit has an adverse impact on the economy.” I think this is a weak question, because it does not state why the budget deficit exists. So while only 20% of economists would unambiguously agree with this, that rises to 42% if they could add a proviso. As we are not told what that proviso was, the question is not very meaningful.

The most interesting question is a third, which states “Management of the business cycle should be left to the Federal Reserve; activist fiscal policies should be avoided.” This was the line taken by Osborne, and (pandemic support aside) by Sunak. Only a third of economists agree, with two thirds disagreeing. That is not a consensus, but a clear majority of US economists disagree with the line taken by recent Conservative Chancellors.

The reason why that proposition is wrong, of course, is that when interest rates are stuck at their lower bound fiscal policy is much more effective at controlling the economy than unconventional monetary policy. The majority of economists holding this view was much slimmer in 2011, and in 2000 the majority is reversed, as few people had studied Japan and were therefore unaware that the lower bound problem was very real.

If fiscal stimulus was the appropriate policy to boost a recovery from recession, you would expect the US to be recovering a lot better than the UK from the pandemic, because the US did implement a large fiscal stimulus while the UK has instead focused on deficit targets. Our second new piece of information is the revised third quarter national accounts, and that is exactly what they show. After a disappointing third quarter’s growth in the UK, GDP remains behind its pre-pandemic level (1.5%) by about the same amount as US GDP is already ahead. Monthly GDP figuresfor October tell a similar story. Here is the historical context from the FT. 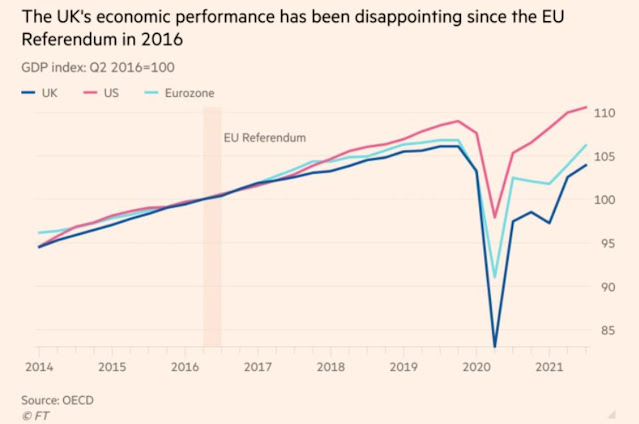 One of the ironies of Boris Johnson’s recent political weakness is that the 50% or thereabouts of Tory MPs who are ego-libertarians now strongly influence potential successors to Johnson and therefore much of the Cabinet. That in turn has ensured that mild measures to help slow the spread of Omicron are shouted down, which will not only increase hospitalisations and deaths but will also cause considerable damage to parts of the economy.

It therefore seems unlikely that the UK will pass the milestone of GDP exceeding pre-pandemic levels until well into 2022. The squeeze in living standards is likely to be much worse, because of rising inflation, reduced benefits and higher taxes. Yet all this seems unlikely to shift public views that the Conservatives are better at running the economy. Ironically Labour’s low ratings on this issue date back to the Global Financial Crisis (GFC), and the perception carefully created that Labour were responsible for austerity.

Which only emphasises the gap between the majority view of experts (that a recession requires fiscal stimulus not austerity) and public opinion. Both the IFS and NIESR favoured fiscal stimulus in the Autumn, but this was hardly noted. The difference approach taken by the US and UK fiscal policy makers in assisting the pandemic recovery should have been a teaching moment, but this too is barely discussed beyond economists. In economics, as in epidemiology and climate science, the Tory party has the ability to dominate public discourse, partly because expert knowledge is undervalued in the public realm.

Professor of Economic Policy at the Blavatnik School of Government, Oxford University, and a fellow of Merton College. This blog is written for both economists and non-economists.
My articlesMy siteAbout meMy books
Follow on:Twitter
Previous The Ego-libertarian party