Home / Worthwhile Canadian Initiative / Presidents: do you get what you pay for?

Presidents: do you get what you pay for?

by
Frances Woolley
My articles My booksMy videos
Follow on:Twitter
Summary:
In 1915, Woodrow Wilson earned ,000 per year, or .9 million in 2018 dollars, for serving as President of the United States. The current incumbent of that office receives only a fraction of that amount: 0,000 annually. Congress has increased the presidential salary three times in the past 100 years: raising it to 0,000 in 1949, to 0,000 in 1979, and to 0,000 in 2001. These rises appear as sharp spikes in the graph below. After each one of these increases, the real value of the presidential salary has been gradually eroded by inflation, except during the deflationary 1930s.  In 1915, an ambitious parent might have wanted their child to be President. These days, being a corporate executive pays much better. Figure 2 takes historical data on executive compensation


Frances Woolley writes Do the self-employed opt out of the Canada Pension Plan?

Frances Woolley writes Can the Great Barrington proposal save the economy?

Frances Woolley writes Pain, brioche, and the language of taxation

Frances Woolley writes Inequality and competition in a digital economy: a case study

Do the self-employed opt out of the Canada Pension Plan?

If you wanna run hot you gotta run steady

The Economics of Increasing Immigration During an Economic Crisis 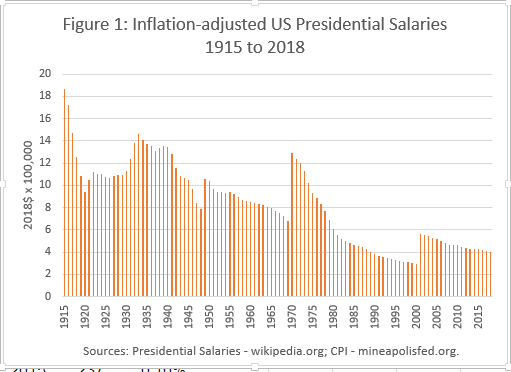 In 1915, an ambitious parent might have wanted their child to be President. These days, being a corporate executive pays much better. Figure 2 takes historical data on executive compensation calculated by Frydman and Saks (ungated here) and plots it against presidential compensation. In the 1930s, there was almost no difference between the two - the US President earned a salary similar to that of top three executive in a large US corporation.  By the early 2000s, the average top executive was earning 25 times the salary of the president. 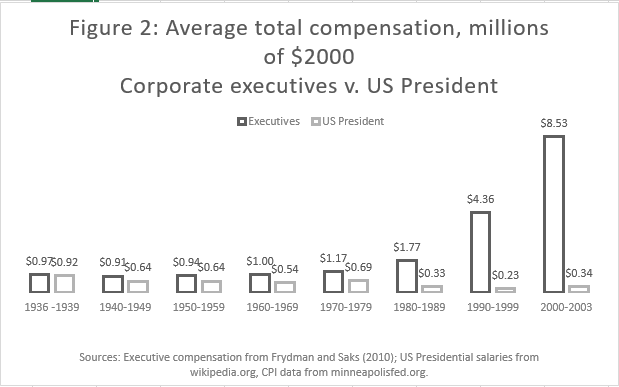 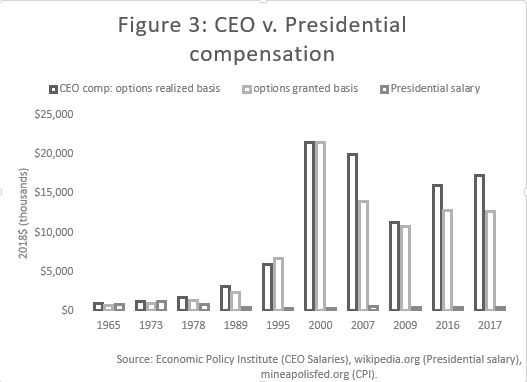 The numbers presented in Figure 3 come with some caveats. The CEO compensation figures include benefits, but the Presidential salary numbers do not include the value of living in the White House. Also, ex-presidents receive a pension of close to $200,000 annually plus secret service protection. These benefits are not included in the presidential salary estimates. These complications, however, do not change the simple fact: CEOs earn a lot more than the President of the United States of America.

But so what? There is no shortage of people wanting to become president. Here are some reasons to believe low presidential pay matters.

First, even though only a small number of people earn top salaries - whether as CEOs, NHL goalies, or corporate lawyers - those salaries can have an outsized impact on the allocation of talent. One theory about why CEOs earn as much as they do are that the CEO salary is the prize for winning a tournament - a contest between all employees to see which one can be the most productive. One would expect the most talented individuals to enter the tournament that offers the biggest prizes - and that's the corporate tournament, not the party political one.

Presidents do receive some prizes - for example, former presidents typically command large speaking fees. Yet this is not necessarily a good thing. Economists and political scientists have long theorized that low salaries contribute to corruption, as underpaid officials attempt to "make up" their salary in other ways. Yet before one starts advocating for a quadrupling of the Presidential salary in an attempt to reduce corruption in that office, it is worth noting that attempts to reduce corruption by increasing salaries have not always been successful - see, for example, here and here.

Presidents, however, get another type of prize - the chance to change the world - to appoint an anti-abortion Supreme Court justice, for example, or to implement environmental regulations. If the number one perquisite of being president is the ability to influence policy, then we would expect to see people with ideological motivations attracted to political office - people who are willing to make financial sacrifices to advance a particular cause. This may be a good thing, or a bad thing.

Looking at the current slate of US presidential candidates, and the salary data presented in this post, it's tempting to say "yup, you get what you pay for." While that was my initial take on the numbers, I'm no longer so convinced. Instead, the decline in the comparative value of presidential salaries can be seen as "a canary in the coal mine" - a clear and visible warning that something is seriously wrong. The structure of the US economy, and US society, have changed drastically since 1776, however the political system adapts to economic and social changes slowly, if at all. Thus the political structures get increasingly out of sync with economic and social reality.

Friends and neighbours south of the 49th parallel - I'm thinking of you this November 3rd, and wishing you well.

I am a Professor of Economics at Carleton University, where I have taught since 1990. My research centres on families and public policy. My most-cited work is on modelling family-decision making, measuring inequality within the household, feminist economics, and tax-benefit policy towards families. I hold a BA from Simon Fraser University, an MA from Queen’s, and completed my doctorate at the London School of Economics, under the supervision of Tony Atkinson.
My articlesMy books
Follow on:Twitter
Previous Can the Great Barrington proposal save the economy?
Next Loanable Funds Redux