Home / Worthwhile Canadian Initiative / Postmodern Economic Measurement: There is no number, only numbers

Postmodern Economic Measurement: There is no number, only numbers

by
Frances Woolley
My articles My booksMy videos
Follow on:Twitter
Summary:
National income accounting distills a nation's economy into a single number: gross domestic product. GDP has been critiqued many times for its neglect of household production, environmental degradation, income distribution, and so on.  Many alternatives have been proposed, such as genuine progress indicators, happiness measures, the Human Development Index, the Better Life Index, well-being indexes, or prosperity indexes. Yet none have dethroned GDP as the king of economic indicators. GDP's prominence is partly due to history - once a measure is widely accepted and understood, it is costly to switch. Moreover, GDP has generally been a good enough measure of the economy. It has a reasonably straightforward interpretation, and is a fairly good indicator of the economic things that


Frances Woolley writes Presidents: do you get what you pay for?

Frances Woolley writes Can the Great Barrington proposal save the economy?

David writes Fiscal discipline for thee, but not for me

Frances Woolley writes Pain, brioche, and the language of taxation

100 million is a really big number: a review of Doug Saunders’ Maximum Canada

Presidents: do you get what you pay for?

National income accounting distills a nation's economy into a single number: gross domestic product. GDP has been critiqued many times for its neglect of household production, environmental degradation, income distribution, and so on.  Many alternatives have been proposed, such as genuine progress indicators, happiness measures, the Human Development Index, the Better Life Index, well-being indexes, or prosperity indexes. Yet none have dethroned GDP as the king of economic indicators.

GDP's prominence is partly due to history - once a measure is widely accepted and understood, it is costly to switch. Moreover, GDP has generally been a good enough measure of the economy. It has a reasonably straightforward interpretation, and is a fairly good indicator of the economic things that matter: people's incomes, their ability to command goods and services, and whether the overall level of economic activity is expanding or contracting.

Yet structural and technological changes threaten to undermine the usefulness of GDP. The link between GDP growth and the typical person's standard of living is weakened by increased income inequality, which allows the rich to capture a disproportionate share of any increases in GDP. Technological change weakens the link between GDP and consumer welfare. GDP measures the value of a good or service by considering its cost of production. But in a digital economy, the marginal costs of production for many goods and services are  close to zero. Thus there is a gap between the amount that an app or game or youtube video contributes to GDP, and its contribution to consumers' well-being or satisfaction. Technological change also complicates national income accounting. For example, if Toronto company hires a freelancer in Delhi through the Tel Aviv-based website fiverr.com, how is each country's GDP affected? (HT to Armine Yalnizyan for many of these points).

Last, but by no means least, population aging could cause Canada to "turn Japanese" and enter an era of low- to no- GDP growth. In this case, governments will not wish to be judged by their GDP performance. Indeed, New Zealand, Scotland, Iceland, and now Canada have committed incorporating quality of life measurements into government decision-making and budgeting.

But what does a quality of life measure actually look like? To illustrate, here is a screenshot of the OECD Better Life Index: 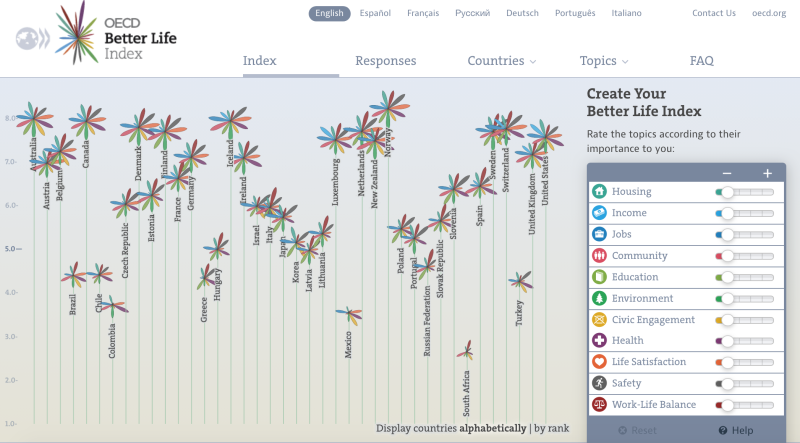 The first point to note is that, unlike GDP, a quality of life index has no intrinsic meaning. It is just a rating on a 1 to 10 or 1 to 100 scale. The same is true for the individual components of the index, such as housing or civic engagement. On the OECD Better Life Index, for example, Canada's income score is 5.4. O.k., but so what?

The unit-free nature of indices has two key implications. First, the index will be interpreted solely in terms of "best place in the world to live" or "Canada slips five places" type headlines. Absolute scores, and improvements thereto, will be ignored, because they have no meaning. Second, technical details will matter. For example, the UN takes the natural log of a country's Gross National Income when calculating the Human Development Index, and ignores any improvements in GNI above $75,000 per year (download source), so it responds little to variations in income among rich countries. The OECD, however, bases its income component on household net adjusted disposable income and household net wealth without taking logs or imposing caps (IIUC the income and wealth numbers are normalized by dividing by the maximum value in the data set). Hence the OECD measure is much more sensitive to income and wealth variations among rich countries than the UN measure. The technocratic nature of indexes reduces their transparency.

Another key observation to make about quality of life and similar indices is that they require more data than GDP measures. A typical quality of life index will be based on GDP plus, that is, GDP plus indicators of health (e.g. life expectancy), education (e.g. enrollment, attainment, literacy), life satisfaction, and so on. This data can take years to collect and compile. Indeed, when one digs into life quality indices, one sometimes finds that they are based on extremely dated data. For example, The OECD Better Life housing measure is based, in part, on the number of dwellings without basic facilities, such as toilets. The last time Canada collected this data was in the 2001 Census - so that twenty-year-old data is what goes into the OECD index. , The data- and time-intensive nature of quality of life indexes means they cannot be used for, say, day-to-day macroeconomic decision-making.

A final feature of any quality of life index is that its value depends crucially on how the various components of the index are weighted. Focus on housing, income and jobs, and the US ranks number one in the OECD Better Life Index, as shown in the first picture below; focus on health, education and work-life balance, and Canada's ranking soars while the US ranking plummets. 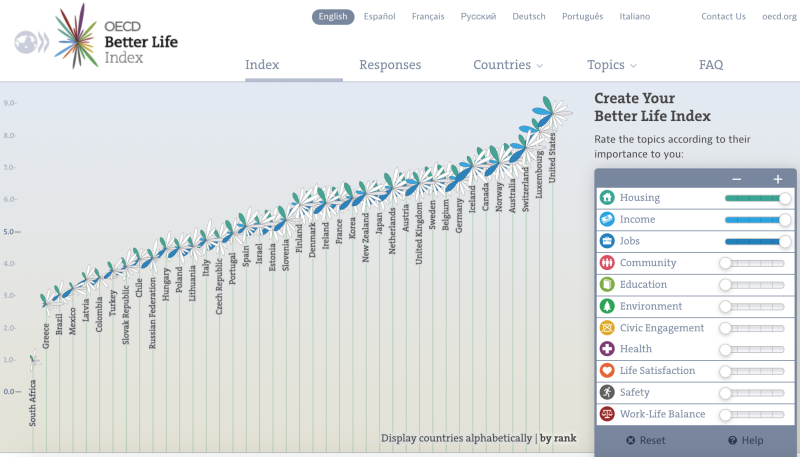 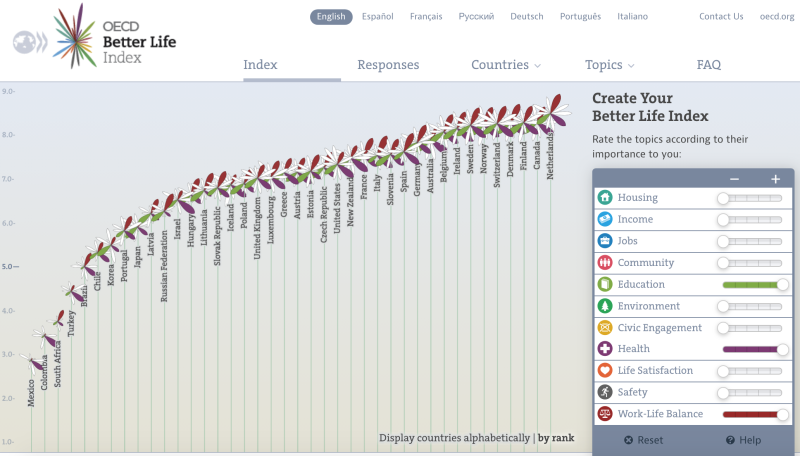 Yet because every country wants to rank highly on a particular index - as noted earlier, rankings are the only salient feature of these index numbers - countries will not agree on what should go into a quality of life index, or how the components should be weighted.

The politics of rankings, together with all of the other issues above, mean that GDP will never be replaced by a single, internationally accepted, quality of life index. Yet this does not mean that the search for alternatives to GDP is futile. The points raised so far have questioned the feasibility of quality of life indices not quality of life measurement.

Life quality can be measured. It shows up in life expectancy statistics and suicide rates. Measures of air pollution and access to green spaces. Homelessness and housing prices. Time spent commuting; time for rest and sleep. The search for a single quality of life index is, in essence, a quest for a simple rule that says how all of these different components of quality of life should be aggregated. Yet there is no such rule. No technocrat can say how much disposable income Canadians are willing to sacrifice to get better air quality. A quality of life index does not relieve policy makers of hard choices: whether to spend tax dollars, on the margin, on mental health services, or fighting homelessness, or on better public transportation.

The answer to the question "how to measure life quality?" is to forget the quest for a single number, and focus on multiple measures. The recognition that there is no number, only numbers, can be extraordinarily liberating. There's no need to agonize overly about which life quality measures to choose - New Zealand is using literally dozens of indicators in its Living Standards Framework. So just pick a couple of dozen that fit with the government's priorities - it's always possible to add or drop indicators at a later date.

The hard and necessary work begins when it comes time to use quality of life thinking in government decision-making. Take, for example, trade policy. The case for free trade agreements, such as the original Canada-US Free Trade Agreement, has often been made on the basis of free trade's impact on GDP. Yet aggregate-level forecasts of the impact of trade on growth ignored the very real disruption in people's livelihoods that would take place as a result of these trade agreements. There were winners, there were losers, and the winners did not, for the most part, compensate the losers. A more nuanced discussion, that incorporated numbers instead of a single number, might have revealed the complex changes free trade would bring, and resulted in somewhat different policy choices.

Postmodernism is sometimes associated with a belief that everything is relative, that the search for truth is futile. That is not the argument I want to make here. There are better policies and worse policies. There are policies that benefit some people, and improve some aspects of life, and there are policies that benefit other people, and other aspects of life. Better quality of life statistics can help illuminate the hard choices that have to be made, and determine priorities for action. But quality of life measurement is a means to, not a substitute for, thoughtful policy making.

I am a Professor of Economics at Carleton University, where I have taught since 1990. My research centres on families and public policy. My most-cited work is on modelling family-decision making, measuring inequality within the household, feminist economics, and tax-benefit policy towards families. I hold a BA from Simon Fraser University, an MA from Queen’s, and completed my doctorate at the London School of Economics, under the supervision of Tony Atkinson.
My articlesMy books
Follow on:Twitter
Previous Choosing the right target: Real options for the Bank of Canada’s mandate renewal
Next How prepared is your hospital for COVID-19?