by
Frances Woolley
My articles My books
Follow on:Twitter
Summary:
The shut down of entire sectors of the economy in response a pandemic is akin to a crop failure. Both represent a sudden, large and unexpected decline in production. Both leave people without resources, without the wherewithall to command the necessities of life. So I am revisiting Amartya Sen's 1981 monograph Poverty and Famines (ungated), to see if his entitlement approach has relevance for today's crisis. Sen begins with the crucial distinction between there being enough and people having enough. In Canada there is enough toilet paper for everyone. Enough clean water. Enough food. But not everyone has enough of these things. Why not? The key concept Sen develops in Poverty and Famines to explain deprivation is "entitlements". An entitlement is, in essence, an ownership claim.


Frances Woolley writes Pain, brioche, and the language of taxation

Frances Woolley writes Inequality and competition in a digital economy: a case study

Frances Woolley writes Can you be confident about an economy you can’t see?

Pain, brioche, and the language of taxation

Inequality and competition in a digital economy: a case study

The shut down of entire sectors of the economy in response a pandemic is akin to a crop failure. Both represent a sudden, large and unexpected decline in production. Both leave people without resources, without the wherewithall to command the necessities of life. So I am revisiting Amartya Sen's 1981 monograph Poverty and Famines (ungated), to see if his entitlement approach has relevance for today's crisis.

Sen begins with the crucial distinction between there being enough and people having enough.

In Canada there is enough toilet paper for everyone. Enough clean water. Enough food. But not everyone has enough of these things. Why not?

The key concept Sen develops in Poverty and Famines to explain deprivation is "entitlements". An entitlement is, in essence, an ownership claim. People go hungry when, for some reason, they are not entitled to food. 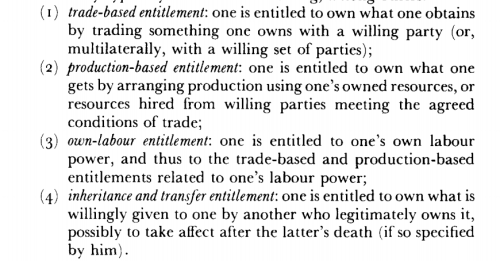 Transfer entitlements are the reason why few people starve in rich countries:

....The reason why there are no famines in the rich developed countries is not because people are generally rich on the average. Rich they certainly are when they have jobs and earn a proper wage; but for large numbers of people this condition fails to hold for long periods of time, and the exchange entitlements of their endowments in the absence of social security arrangements could provide very meagre commodity bundles indeed. With the proportion of unemployment as high as it is, say, in Britain or America today, but for the social security arrangements there would be widespread starvation and possibly a famine. What prevents that is not the high average income or wealth of the British or the general opulence of the Americans, but the guaranteed minimum values of exchange entitlements owing to the social security system. (Sen, Poverty and Famines, pp. 6-7 emphasis added)

Sen wrote these words before the Clinton-era welfare reforms, before the rise of the gig economy and independent contractors; before Thatcherism and Britain's austerity era. The "guaranteed minimum values" are not what they once were.

Still, the idea of "entitlements" can inform possible COVID-19 responses by focusing attention on ownership patterns and something Sen calls "entitlement mappings":

To say that starvation depends 'not merely' on food supply but also on its 'distribution' would be correct enough, though not remarkably helpful. The important question then would be: what determines distribution of food between different sections of the community? The entitlement approach directs one to questions dealing with ownership patterns and—less obviously but no less importantly—to the various influences that affect exchange entitlement mappings .... In so far as food supply itself has any influence on the prevalence of starvation, that influence is seen as working through the entitlement relations. If one person in eight starves regularly in the world, this is seen as the result of his inability to establish entitlement to enough food; the question of the physical availability of the food is not directly involved (pp. 7-8).

An "entitlement mapping" is a function that "specifies the exchange entitlement set of alternative commodity bundles respectively for each endowment bundle." (p. 46)

The exchange entitlement mapping... will depend on the legal, political, economic and social characteristics of the society in question and the person's position in it. Perhaps the simplest case in terms of traditional economic theory is one in which the endowment bundle can be exchanged in the market at fixed relative prices for any bundle costing no more, and here the exchange entitlement will be a traditional 'budget set' (p. 46)

This quote is important because it emphasizes that ownership rights are a product of rules and institutions - the question is only what those rules and institutions should be. Indeed, the entitlement approach is most useful in analyzing rights within a legal structure - as Sen argues in the quote below, when looting or brigandage is widespread, his entitlement approach will be "defective" (p. 49): 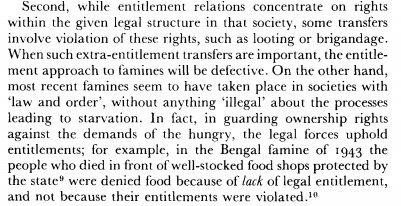 Starvation, Sen argues, can have two causes: an endowment collapse, or an "unfavourable shift in the exchange entitlement mapping". Later on in the book (after detailed descriptions of various famines, which I skipped) he expands upon this point further:

A person's ability to command food—indeed, to command any commodity he wishes to acquire or retain—depends on the entitlement relations that govern possession and use in that society. It depends on what he owns, what exchange possibilities are offered to him, what is given to him free, and what is taken away from him. For example, a barber owns his labour power and some specialized skill, neither of which he can eat, and he has to sell his hairdressing service to earn an income to buy food. His entitlement to food may collapse even without any change in food availability if for any reason the demand for hairdressing collapses and if he fails to find another job or any social security benefit.... A sharp change in the relative prices of ...haircuts, or labour power (i.e. wages) vis-à-vis food can make the food entitlements of the respective group [hairdressers] fall below the starvation level. It is the totality of entitlement relations that governs whether a person will have the ability to acquire enough food to avoid starvation, and food supply is only one influence among many affecting his entitlement relations. (Sen, Poverty and Famines, pp. 154-5)

Sen uses the entitlement approach to critique the approach adopted by the British during the Bengal famine - "leaving such matters to the market mechanism, quoting 'the celebrated author of the Wealth of Nations'" (p. 160). As Sen argues:

Adam Smith's proposition is, in fact, concerned with efficiency in meeting a market demand, but it says nothing on meeting a need that has not been translated into effective demand because of lack of market-based entitlement and shortage of purchasing power (Sen, Poverty and Famines, p. 161).

Indeed, Sen gives numerous examples of situations where food has been exported out of famine-stricken areas. As he points out, "If one doesn't have much to exchange, one can't demand very much, and may thus lose out in competition with others whose needs may be a good deal less acute, but whose entitlements are stronger" (p. 161).

Income transfers are a straightforward and direct way of restoring entitlements to those who have lost them. The Canadian government is doing this through the Canada Emergency Response Benefit, and this is a good thing.

A second, and less obvious way, of changing the entitlement structure is to think critically about the rules and institutions that underlie the current structure of entitlements. Why, for example, do we allow credit card companies to charge interest rates that would once have been illegal under usury laws? Why aren't credit rating agencies, which exercise such control over people's entitlements, better regulated? When do landlords have the right to evict tenants, and what is a reasonable penalty for being unable to pay rent?

Indeed, as Sen says in his conclusion to Poverty and Famines:

Finally, the focus on entitlement has the effect of emphasizing legal rights. Other relevant factors, for example market forces, can be seen as operating through a system of legal relations (ownership rights, contractual obligations, legal exchanges, etc.). The law stands between food availability and food entitlement. Starvation deaths can reflect legality with a vengeance (p. 166).

Will there be starvation deaths as a result of this pandemic? I hope not. But a lot of people  are facing a hard choice today between paying the rent and having enough money to buy groceries.

I am a Professor of Economics at Carleton University, where I have taught since 1990. My research centres on families and public policy. My most-cited work is on modelling family-decision making, measuring inequality within the household, feminist economics, and tax-benefit policy towards families. I hold a BA from Simon Fraser University, an MA from Queen’s, and completed my doctorate at the London School of Economics, under the supervision of Tony Atkinson.
My articlesMy books
Follow on:Twitter
Previous This is no virus for old men
Next The behavioural economics of the Marie Kondo method