by
Frances Woolley
My articles My books
Follow on:Twitter
Summary:
Trends in employment rates have three distinct elements. The first is cohort effects. For example, women born in the 1920s and 1930s, for the most part, dropped out of the labour force when they had children. Many did not return. Their daughters, the Baby Boomers, entered the labour force in large numbers, and stayed in.  Those decisions had effects that lingered for decades. Women born in 1935, for example, were still in the employment rate calculations - and depressing female employment rates - in 1999. The second is life-cycle effects, for example, dips in employment associated with being in school, or caring for family members, or health problems. For example, as the Canadian population gets older, relatively more workers are in the late 50s/early 60s age groups, where health

Frances Woolley writes How prepared is your hospital for COVID-19?

Frances Woolley writes Postmodern Economic Measurement: There is no number, only numbers

Covid-19, Italy and Lessons for Canada

Trends in employment rates have three distinct elements. The first is cohort effects. For example, women born in the 1920s and 1930s, for the most part, dropped out of the labour force when they had children. Many did not return. Their daughters, the Baby Boomers, entered the labour force in large numbers, and stayed in.  Those decisions had effects that lingered for decades. Women born in 1935, for example, were still in the employment rate calculations - and depressing female employment rates - in 1999.

The second is life-cycle effects, for example, dips in employment associated with being in school, or caring for family members, or health problems. For example, as the Canadian population gets older, relatively more workers are in the late 50s/early 60s age groups, where health problems are more common. That alone will tend to decrease employment rates.

The third factor driving employment rates is economy-wide trends, for example, a natural resource boom, or a recession.

To understand how all of these effects drive female employment rates, it helps to break out the employment experiences of different age cohorts. 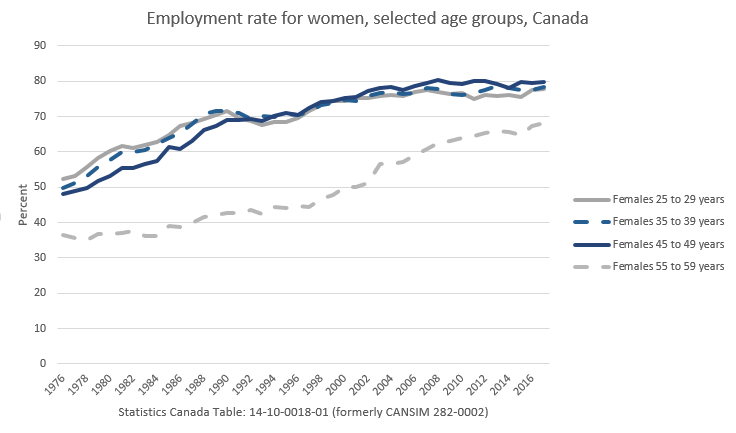 The thing to notice about this chart is how the jump up in female employment rates happens in different decades for different age groups. Employment rates for women 25 to 29 and 35 to 39 rose markedly in the 1970s and 1980s. These were the Mary Tyler Moore show years. It was time of profound social transformation, when women had unprecedented control over their fertility, increased access to education, and at least some barriers women faced in the workplace started to fall. More women committed to careers, and more chose to combine employment and motherhood.

In the year 2000, the oldest Baby Boomers reached their mid-50s, and the employment rate of women aged 55 to 59 started to take off. Indeed, of the four groups shown here, 55 to 59 year olds are the only ones to still have a rising employment rate.

The chart above only shows selected age groups, so that I can keep the chart readable and still show a sharp contrast between women at different stages of their life cycle. If I select a different set of age groups, a subtly different picture emerges: 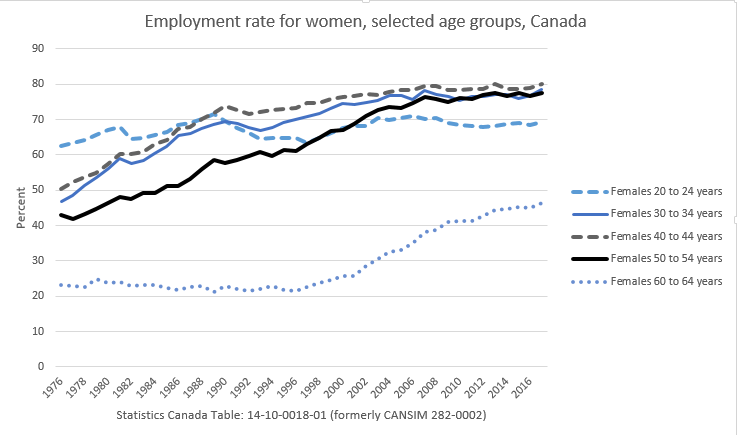 There are three take-aways from this second chart. The first is the shift in the relative position of 20 to 24 year old women. In 1976, women between 20 to 24 were more likely than any other age group to be employed. Now, they are one of the age groups least likely to be working for pay. The second is that women experience a change of life in their mid 50s. Women in their early 50s are as likely to be employed as women a decade or two younger than they are. It is in the late 50s and early 60s that women's probability of being employed starts falling dramatically. A final take-away is the rapid increase in employment rates in women in their early 60s since the year 2000. The Mary Tyler Moore generation has hit middle age, and they're bringing the revolution with them.

These charts reveal that something dramatic happens to women's probability of employment from aged  55 onwards. Is it only women, or do men experience similar employment rate declines? Let's take these older age groups, and look more closely at the male-female differences. 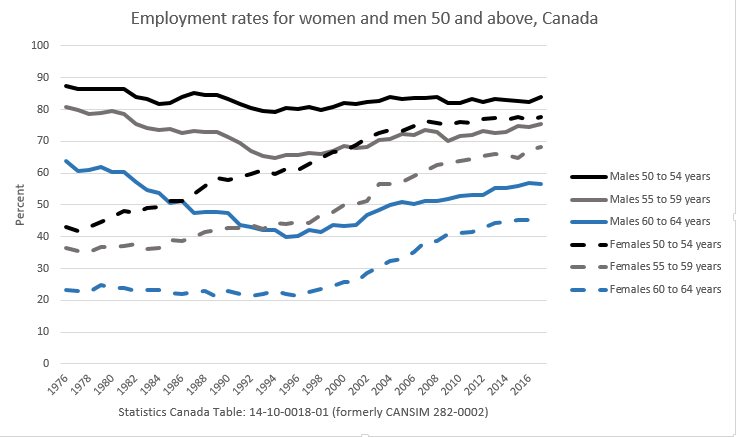 What this chart shows is that the employment rates of both men and women decline with age, but women's employment rates fall more rapidly. The difference in male and female employment rates, both in absolute and in percentage terms, increases with age. Women between 60 and 64 have the lowest employment rate of any "working age" cohort. Yet that rate is growing, and rapidly.

These charts, taken together, suggest an answer to the question, "Has Canada's female employment rate maxed out?" For women between the ages of 25 and 49, employment rates have been largely stable for the the past decade. Policy might be able to shift female employment rates up slightly. Greater availability of child care might help some women shift from part-time work into full-time work. But, for the most part, employment rates of younger working-aged women appear to be moving up and down with the business cycle, suggesting that, for women from 25 to 49, the best employment policy is a strong economy.

However for women 55 and older, there is still room to improve labour market outcomes. Indeed, if nothing changes, the overall employment rate of women will fall over the next 5 to 10 years, as the large number of women women born at the peak of the baby boom enter the 55 to 59 and 60 to 64 age groups.

Yet this begs a question: is there any reason to  care about the employment rates of older Canadians? Perhaps they're all just choosing Freedom 55, and a more relaxed and pleasant lifestyle? This seems unlikely given that 30 percent of Canadians between the ages of 50 and 64 have no RRSPs or similar assets, 18 percent have no private pension assets at all, and the median asset holdings of those who do have retirement savings is $355,100 - hardly enough for a lavish lifestyle (numbers from 2016 Survey of Financial Security).

But perhaps, even if older Canadians aren't financially secure, they're choosing to retire anyways. Women might rationally choose to retire earlier than men, because married couples tend to synchronize their retirement decisions, and women are, on average, married to men who are older than they are. Also middle-aged women, more than middle-aged men, tend to have caregiving responsibilities - caring for grandchildren, or spouses, or parents.

Indeed this raises the question: why such a strong focus on child care as a labour force strategy? Why not think about elder care as well?

Even if discrimination doesn't prevent older women from being hired, it may make working less pleasant - less respect from coworkers, fewer opportunities for advancement, and so on. This may be another factor driving older women's lower employment rates. Yet at this point, the discussion is starting to get speculative - the fact is that there is very little research on female workers 55 and over.

So, summing up: if the goal is to increase female employment rates, then the best place to focus is on older women, because there are a lot of older women in Canada, and their employment rate is  low at present, but rising steadily, suggesting potential for further growth. We don't know much about employment strategies specifically targeted towards older women, so it makes sense to start with the tried and true: access to labour market programs, especially training and job search, subsidies for employers, internships and other programs, support for caregiving responsibilities, and policies to combat discrimination.

I am a Professor of Economics at Carleton University, where I have taught since 1990. My research centres on families and public policy. My most-cited work is on modelling family-decision making, measuring inequality within the household, feminist economics, and tax-benefit policy towards families. I hold a BA from Simon Fraser University, an MA from Queen’s, and completed my doctorate at the London School of Economics, under the supervision of Tony Atkinson.
My articlesMy books
Follow on:Twitter
Previous Are education attainment levels the root cause of all good earnings news?
Next Tracking the Bank of Canada’s staff projections through the 2008-9 recession

Thoughts for the weekend