by
Global Economic Intersection Analysis Blog Feed
My articles My booksMy videos
Follow on:Twitter
Summary:
Posted on 20 January 2021 by UPFINA Article of the Week from UPFINAEconomic Slowdown DeepensThis is the first truly terrible jobless claims report since the slowdown started. There will be even more job losses in January than in December, but investors will probably ignore this as the vaccines are set to stop the virus’ spread in the next few months (14.3 million vaccines have gone out in the US). The main questions are how deep this slowdown gets and when it ends. We could easily see sharp job creation starting as early as March or April.Please share this article - Go to very top of page, right hand side, for social media buttons.Specifically, in the week ending January 9th, seasonally adjusted initial claims spiked from 784,000 to 965,000 which was way above estimates for

Friedman Vs Phillips: A Historic Divide

This is the first truly terrible jobless claims report since the slowdown started. There will be even more job losses in January than in December, but investors will probably ignore this as the vaccines are set to stop the virus’ spread in the next few months (14.3 million vaccines have gone out in the US). The main questions are how deep this slowdown gets and when it ends. We could easily see sharp job creation starting as early as March or April.

Specifically, in the week ending January 9th, seasonally adjusted initial claims spiked from 784,000 to 965,000 which was way above estimates for 790,000 and the highest estimate which was 835,000. That’s the biggest jump since March 28th and the highest amount since August 22nd. Claims may have been suppressed in the prior week because of the holiday. This is the first week lapsing the benefits ending. Now we need to see the pandemic benefits start up again and the extra weekly $300 go out. This should significantly quell the worst aspects of this slowdown. That’s why we don’t expect a double dip recession.

Non-seasonally adjusted claims rose 231,000 to 1.151 million which easily was above the seasonal adjustment factor of 186,000. For seasonally adjusted claims to fall next week, NSA claims need to fall at least 125,000 due to the adjustment. PUA claims were up 123,000. Remember, we said PUAs would spike when they were restarted because some states reported zero (they thought pandemic benefits would end because the stimulus wasn’t passed until the last minute). There were actually two new states that fell to zero and one state that went back to normal this week (Florida). Even though there was a spike in the overall number, this isn’t close to where it will be when the programs are back up in all states.

Despite PUAs still being limited by states reporting zero PUAs, the total with NSA claims was up 33% as you can see from the chart above. That’s the biggest increase since the first week of December. In the week ending January 2nd, continued claims rose from 5.072 million to 5.271 million. In the week ending December 26th, the total number of people on all benefits fell from 19.15 million to 18.41 million. The final tally of people on benefits who would have lost them if the programs weren’t extended is 11.6 million. Of course, as we mentioned some states stopped PUAs because they didn’t think the stimulus would pass/prepared in case it wasn’t passed.

This probably won’t be a double dip recession even though the data from January is about to be weak. Goldman Sachs is actually projecting 6.6% GDP growth in 2021 (median estimate is 4.1%) and 4.5% unemployment at year end. Goldman sees disposable income growth of +4.5%. It assumes the $1.9 trillion stimulus will pass. This differs from jobless claims and consumer comfort because those data points are before the full effect of the $900 billion stimulus is shown let alone the next stimulus and the economic reopening.

As we mentioned, consumer comfort is crashing. As you can see from the chart above, the index fell to the lowest reading since July. We also got the University of Michigan consumer sentiment index which wasn’t as bad as that one. Sentiment fell from 80.7 to 79.2. Current conditions fell from 90 to 87.7. Expectations fell from 74.6 to 73.8. As you can see from the table below, there was a massive gain in Democratic confidence and a large loss in GOP confidence. The gap is similar to the gap 4 years ago, but in reverse because Trump won last time.

This is a Wall Street Bets market and you’re just living in it. Wall Street Bets is a Reddit group with 1.9 million users who like to make crazy speculative bets. One speculator managed to own 0.4% of GameStop if the post is accurate. The chart below shows the user growth in this subreddit has been parabolic. With 67,953 comments per day, this is the 2nd most popular subreddit on the website. Keep in mind, Reddit is the 18th largest website on the world. It’s much bigger than Twitter. It had 1.74 billion visits in December. 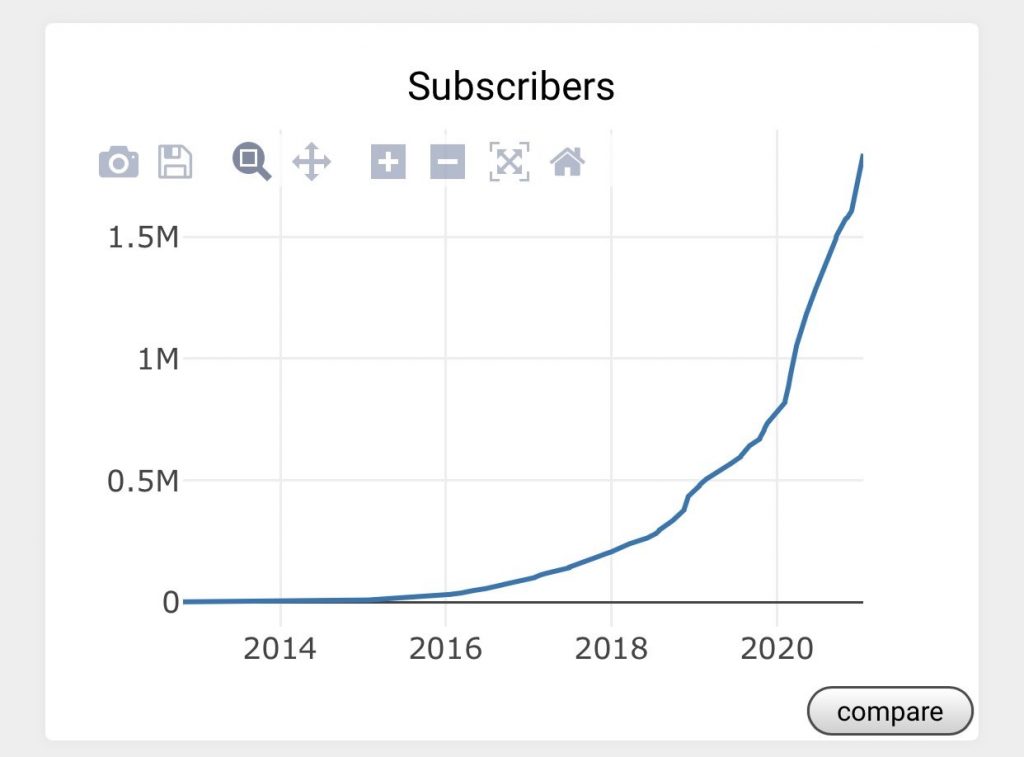 This is such a crazy market that 6 of the top 10 most active stocks on Tuesday January 12th were under $1. They accounted for 18% of the entire volume traded in the stock market. Furthermore, last week, the put to call ratio was at 0.34 on back-to-back days. It did this 29 times from 1997 to 2000 (no other time). If you thought the market was crazy in 2020, welcome to 2021. The market is even crazier. As of January 14th, there were 54 SPACs already. That’s a pace of over 1,300 for the year. We won’t get there; the pace will probably quicken before this ends in a train wreck.

From 2014 to 2020, FAAMNG stocks led the way. Those are too boring for speculators in 2021. As you can see from the chart below, Facebook and Alphabet are now only slightly more expensive than the overall market even though they have way better than average businesses. Microsoft’s multiple based on GAAP profits is 33% lower than its peers when they are looked at on a non-GAAP basis. Netflix has a lower 2022 PE ratio than Disney even accounting for a recovery in Disney parks. This is the last stage of the bubble. Now the greatest businesses of the cycle aren’t appealing to speculators because they can’t double in a couple days like GameStop.

The jobless claims report was a disaster and consumer comfort plummeted. The good news is the $900 billion stimulus hasn’t had time to fully effect the economy and another stimulus is on the way. Furthermore, 14.3 million vaccine doses have gone out. In America we are a couple months from normalcy. Wall Street Bets is dominating this stock market. The FAAMNG winners are being thrown out and replaced with risky penny stocks with no profits. Many SPACs don’t even have sales. This is a disaster waiting to happen.