by
Global Economic Intersection Analysis Blog Feed
My articles My books
Follow on:Twitter
Summary:
Posted on 11 November 2020 by UPFINA UPFINA Article of the Week The October jobs report was very good as we got a positive revision to September data, higher private sector job creation, and an across the board beat on everything except wage growth. Please share this article - Go to very top of page, right hand side, for social media buttons. There were 672,000 jobs added in September and 892,000 private sector jobs added. Those are positive revisions of 9,000 and 15,000. In October there were 638,000 jobs added which beat the consensus of 575,000. Private sector job creation was 906,000 which beat the consensus of 650,000 (up 14,000 from last month). The most optimistic estimate of 875,000 was beaten. Investors had been expecting a COVID-19 related slowdown, but none

Tyler Cowen writes So what does Friday bring us?

Tyler Cowen writes Selfish corporations, and does thinking about business make you like it more?

The October jobs report was very good as we got a positive revision to September data, higher private sector job creation, and an across the board beat on everything except wage growth.

There were 672,000 jobs added in September and 892,000 private sector jobs added. Those are positive revisions of 9,000 and 15,000. In October there were 638,000 jobs added which beat the consensus of 575,000. Private sector job creation was 906,000 which beat the consensus of 650,000 (up 14,000 from last month). The most optimistic estimate of 875,000 was beaten. Investors had been expecting a COVID-19 related slowdown, but none materialized. The chart below shows job creation if you weight the establishment survey at 0.8 and the household survey at 0.2. There was a meaningful acceleration from September.

So how did the economy create so many jobs if COVID-19 got worse? The economy is dynamic, meaning COVID-19 resistant jobs are being created. Plus, there is some virus fatigue which is when people start going back to their normal routines regardless of the data. To be clear, in October, the virus wasn't as bad as the peak in July or the spring. It's possible the economy still slows in November since the virus is more prominent than it was in October.

Where The Jobs Were

The ADP report said there were only 365,000 private sector jobs added which was much too negative. There actually were 38,000 manufacturing jobs added, not the 7,000 ADP claimed. However, that missed estimates for 48,000 and fell from 60,000. As you can see from the chart below, there were 84,000 construction job added which beat ADP's 7,000. That's no shock because home builders are the most confident they have ever been. 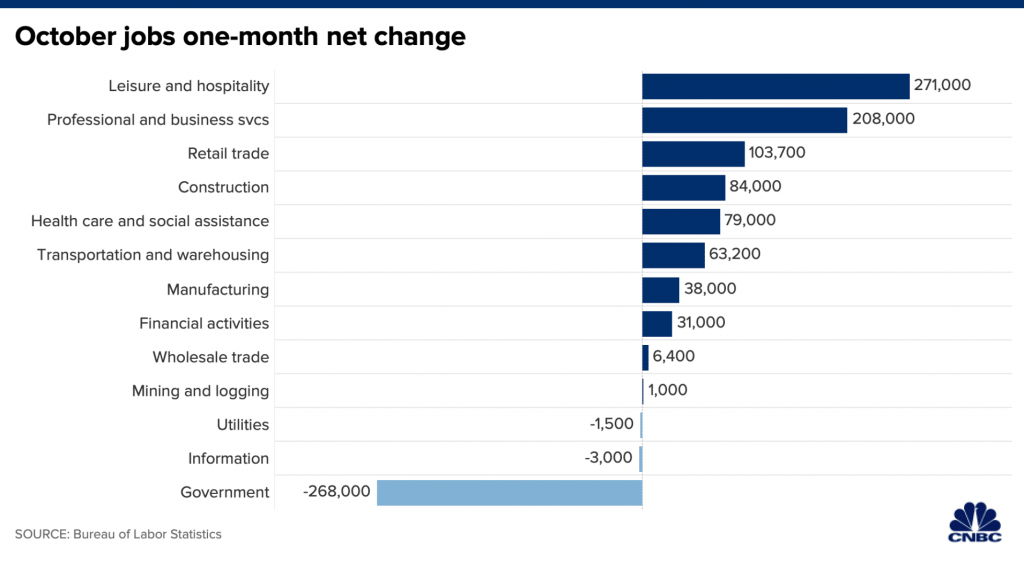 Leisure and hospitality added 271,000 jobs which was the most out of any industry. This industry is resilient despite COVID-19 remaining an issue. That won't be the case if we get lockdowns like Europe. 208,000 professional and business services jobs were created; these are well paying jobs. The worst part of this report was government job creation as it lost 268,000 jobs; it lost 220,000 last month. The job losses were for the same reason. Temporary census workers went away and education lost jobs. There was a 147,000 decline in federal workers because of the census. Excluding that, 9,000 federal jobs were added.

There was no recovery in education jobs like we expected due to the delayed start to the school year. There were declines of 98,000 and 61,000 in local and state education employment. Technically, they added workers, but not enough to make up for the negative effect from the seasonal adjustment. It appears the budget problems limited education job creation. As you can see from the chart below, quite a few states are projecting major revenue shortfalls as businesses and individuals are paying less taxes.

The percentage of people who teleworked fell from 22.7% to 21.2%. You wouldn't expect that because COVID-19 hasn't been resolved. However, it's not that there was a big shift in those working from home going back to the office. Instead, more people who don't have jobs that can be done at home went back to work. In October, 15.1 million people said they weren't able to work because their employer closed or lost business because of COVID-19. That's down from 19.4 million in September.

This goes back to the COVID-19 fatigue point. The industries that can't adapt are deciding to go back to normal in spite of the virus. On the positive side, the industries that can have employees work from home are mostly sticking with those plans. There is no use in risking someone getting sick especially since having people work from home is cheaper than if they work at the office.

The unemployment rate fell from 7.9% to 6.9% which was below the consensus of 7.7% (the lowest estimate was 7%). Despite this seemingly normal rate, the labor market is not back to normal. Firstly, the real rate is 0.3% higher because of the misclassification of workers employed but absent from work.

One of the reasons the unemployment rate fell so much is household employment caught up to payrolls. The two measurements converged as the chart below shows. The U6 underemployment rate fell from 12.8% to 12.1% which means there were 0.3% more marginally attached workers. The peak after the 2001 recession was 10.4%, showing how far the labor market is from a complete recovery.

The best part of this report is there were fewer permanently unemployed people. The worry in this recovery has been that most of the temporary layoffs would become permanent. The number of permanent job losers fell from 3.756 million to 3.684 million. That's the 2nd decline since the recession started (bigger decline this time than in July). The number of temporary job losers on layoffs fell from 4.637 million to 3.205 million. About 2.5 million workers can easily get their jobs back if this number normalizes. Once it normalizes, it will be tougher to add employment because the low hanging fruit will be gone.

Even though investors feared that the economy was going to slow in October because of COVID-19, there were more private sector jobs created than in September. However, we can't ignore the weakness in education as states and local governments are facing major deficits. A stimulus could help them, but McConnell stated the economy doesn't need a major stimulus because of this great report. The decline in permanent employment was a huge victory. However, there could be weakness later in the year as COVID-19 gets worse. There will be some sort of stimulus, but it is now less likely to be the $3 trillion one the Dems want, unless the Dems end up getting a majority vote in the Senate (will find out likely in January).