by
Global Economic Intersection Analysis Blog Feed
My articles My books
Follow on:Twitter
Summary:
Posted on 12 September 2020 by UPFINA Weekend Reading from UPFINAThe latest Redbook same store sales growth reading was bad as it fell from 4.6% to -0.1% in the week of September 5th. It’s always hard to figure out if one week of bad data means the trend is changing. The good news is that was after the back to school shopping season ended, so it was less important.Please share this article - Go to very top of page, right hand side, for social media buttons.Further good news is new COVID-19 cases fell in Florida, Mississippi, Georgia, and Tennessee even though school started in early August. There has been an increase in the counties with a high number of college students per person, but overall, the data has improved in the past couple months. As of September 9th, the 7 day

Some Optimistic Reflections On The Potential For Economic Experimentation

The latest Redbook same store sales growth reading was bad as it fell from 4.6% to -0.1% in the week of September 5th. It’s always hard to figure out if one week of bad data means the trend is changing. The good news is that was after the back to school shopping season ended, so it was less important.

Further good news is new COVID-19 cases fell in Florida, Mississippi, Georgia, and Tennessee even though school started in early August. There has been an increase in the counties with a high number of college students per person, but overall, the data has improved in the past couple months. As of September 9th, the 7 day average of new deaths was 753 and the 7 day average of new cases was 37,248. Total active cases are actually falling!

Despite the major decline in new cases and deaths per day, the economy isn’t close to back to normal because businesses and politicians don’t want to take any risks. A politician might not get re-elected and a business person might lose their job. That’s why many say they are waiting for a vaccine before a return to normalcy even though there’s a chance better treatments and testing can eliminate most deaths. At an unknown point, the economy will push further towards a return to normalcy regardless of whether a vaccine comes.

Interestingly, in Spain the 7 day average of new cases peaked at 7,435 on August 27th which is slightly below the peak of 8,992 on March 20th. The 7 day average of deaths peaked at 866 on April 3rd; it’s now at just 63. It has been 2 weeks since that peak in cases, yet deaths are less than a tenth of the previous peak.

When Will Traveling Come Back?

It appears in the past week, we just hit an important threshold in terms of people being comfortable with vacations and work trips. As you can see from the chart below, the percentage of consumers saying they are comfortable traveling now increased from 26% to 36% from the last week of August to the first week of September. That might be because new cases and deaths are dropping or because of the announcement of Abbott’s new test. Since Abbott’s test won’t come out for another 2 weeks or so, that might not be the reason since people said they are willing to travel now. Still 44% will wait another 1-2 months to travel.

On the other side of the coin, fewer than 10% of New York’s office workers returned to work as of last month. 25% of major employers expect to bring workers back by the end of the year and 54% said they will return by July 2021. Both surveys can change. If the virus gets worse, less people will travel and return to work. If Abbott’s test works so well the virus stops spreading by November, everyone will be back to work on site and traveling like normal.

In July, there were 6.618 million job openings which was up from 6.001 million and above the consensus for 5.95 million. As you can see from the chart below, the number of unemployed people per job opening fell from 3 to 2.5. You can tell how full the labor market was at the end of last cycle by the fact that there were more openings than unemployed people for the first time. This ratio peaked at 6.4 in July 2009 which means this recession didn’t get as bad as the last one.

On the negative side, hires fell from 6.97 million to 5.787 million. That’s not a bad reading though as the spike in May and June was unsustainable. We’re only slightly below openings in February before the recession (5.864 million).

Now that it seems like the worst of the recession is over for the labor market, it’s time to look at the scarring which is the long term impact of the recession. The long term impact will be fully shown after the temporary job losses either turn permanent or turn back into employment. Normally in recessions, the scarring is known once it’s over, but it isn’t known in this case (even though the recession is over) because there are over 6 million workers still in a state of uncertainty (temporary unemployment).

As we discussed earlier, the economy isn’t back to normal as people aren’t traveling as much and they are working from home. We need to know when that will resolve itself to determine the details on the lasting economic damage. The long term (1-5 years) impacts on the labor market could be less than a mild recession if return to normalcy goes well. That’s crazy because people were predicting a depression in March and April. 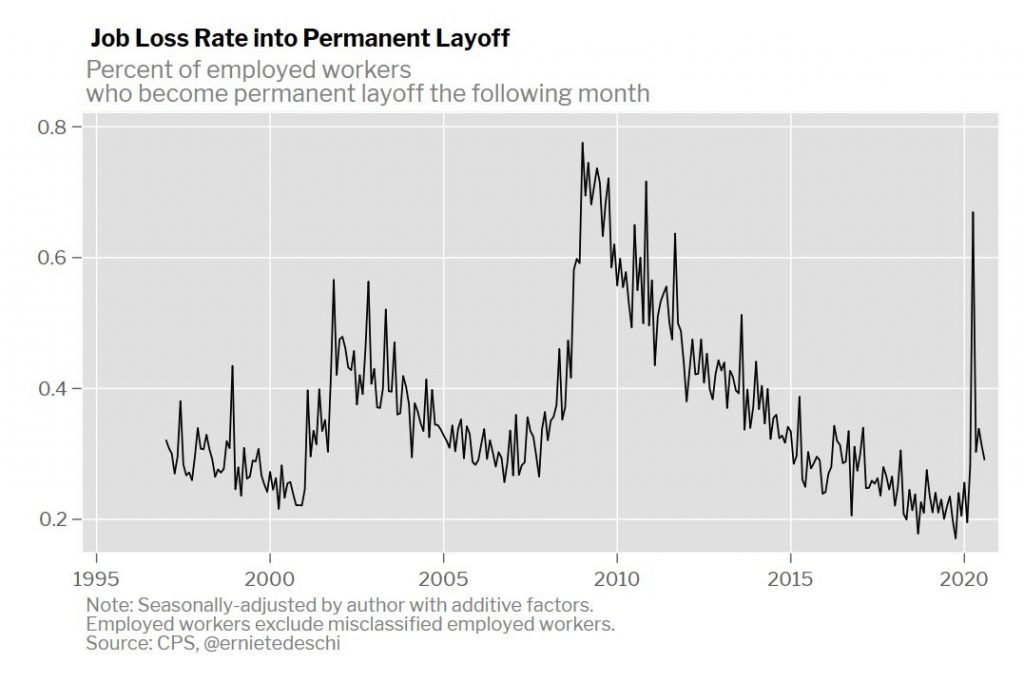 On the positive side, the chart above shows the percentage of employed workers who become permanently unemployed in the following month has decreased sharply. It’s not as high as it was after the past 2 recessions. This is in line with the data on the percentage of unemployed people for various lengths. A very low percentage have been unemployed for 5 weeks or less. That means most of the new permanent layoffs are coming from the temporarily unemployed workers and that there haven’t been many new job losses in the past few weeks. We’re dealing with the consequences of the spring and little else.

On the negative side, the chart below shows the percentage of temporarily unemployed workers who became permanently unemployed in the next month is increasing. This is the race we have discussed. The longer it takes the economy to normalize, the more likely the temporary job losses will become permanent. The chart will look a lot better if Abbott’s new test eliminates the spread of the virus this fall. 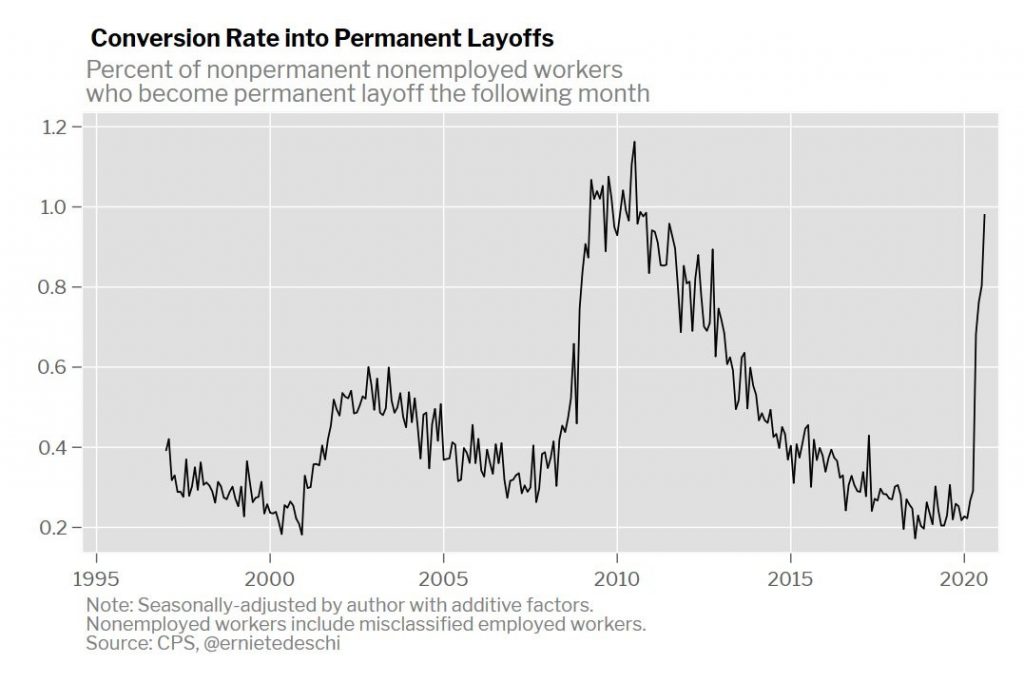 People are getting more comfortable with going on vacation, but employers aren’t fully on board with bringing workers back to the office. Job openings increased in July. There aren’t many new job losses nor are there many new permanent job losses from previously employed people. On the negative side, temporary layoffs are increasingly becoming permanent which means the economy needs to get back to normal quickly to avoid deep long term damage.

My articlesMy books
Follow on:Twitter
Previous Metacritique Of Dogmatic Reason: Johann Georg Hamann
Next On The Question Of Current And Future Lockdowns

Who is my favorite public intellectual?