Worse Than The Financial Crisis

by
Global Economic Intersection Analysis Blog Feed
My articles My booksMy videos
Follow on:Twitter
Summary:
Posted on 18 November 2020 by UPFINA Article of the Week from UPFINAMost of the official economic data has been okay even though COVID-19 is ravaging the country as hospitalizations are nearing the spring peak (adjusted for some states not reporting in the spring) and deaths are nearing the summer peak. Our biggest worry is the 13.5 million people on pandemic unemployment benefits being thrown off at the end of the year without an extension. It will be far too late for them if we need to wait until after inauguration day on January 20th.Please share this article - Go to very top of page, right hand side, for social media buttons.The good news is the vaccines could end this virus next year. The CEO of BioNTech, the company that is working on the vaccine with Pfizer, stated,“If the

A Brief History Of The Buy-to-Build Indicator

What Do IQ Tests Really Measure?

Most of the official economic data has been okay even though COVID-19 is ravaging the country as hospitalizations are nearing the spring peak (adjusted for some states not reporting in the spring) and deaths are nearing the summer peak. Our biggest worry is the 13.5 million people on pandemic unemployment benefits being thrown off at the end of the year without an extension. It will be far too late for them if we need to wait until after inauguration day on January 20th.

The good news is the vaccines could end this virus next year. The CEO of BioNTech, the company that is working on the vaccine with Pfizer, stated,

“If the question is whether we can stop this pandemic with this vaccine, then my answer is: yes, because I believe that even protection only from symptomatic infections will have a dramatic effect."

We aren’t experts on this field, so we will leave this quote without further commentary.

Before we review the latest economic data, recognize that the stock market doesn’t care if the virus is bad this fall and winter. It doesn’t care about how the economy does in the near term. The only thing that would scare investors would be a delay in vaccine production. However, with Moderna’s latest good news on its vaccine, the risk of production woes has diminished. The difference between now and March is we have much less uncertainty. Don’t be tricked into thinking another 30% crash is coming because the virus is getting worse. Find us anyone who thinks the virus won’t be bad in the next 1-3 months. If everyone agrees with you, how can your call for a crash be right?

Even though most official data has been good, we are finally starting to see cracks in consumer spending via high frequency data. The slight weakness is being followed closely because it has been anticipated due to the spread of the virus. As you can see from the chart below, Chase spending growth nearly rose to 0% in the 2nd half of October; it fell to -7.4% in the week of November 9th. If this trend continues, which it should, it spells bad news for the holiday shopping season. No stimulus is coming by the end of the year. At best we can hope for pandemic benefits to be extended. 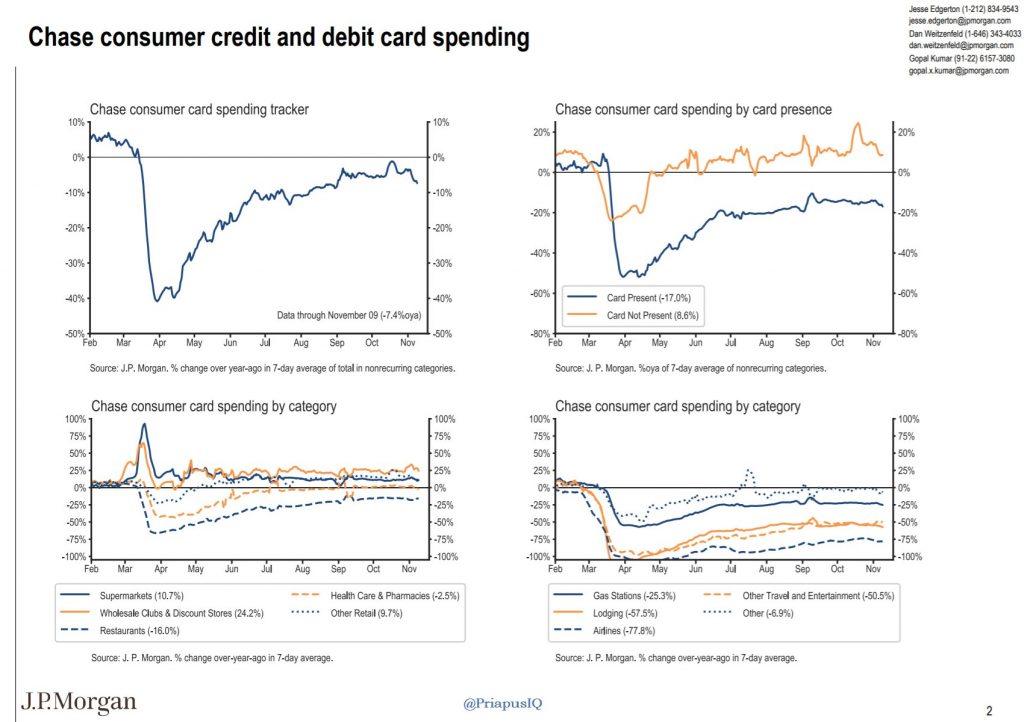 Spending at restaurants was down 16% yearly while spending at wholesale and discount stores was up 24.2%. That differential will shrink when the economy reopens. Spending at gas stations was down 25.3% as mobility is declining again. Spending at airlines was down 77.8%. Boeing stock is up 29.6% since October 30th as the market doesn’t care about the data in the next few weeks. We can’t expect a weak holiday shopping season to cause stocks to crash, but some individual stocks might react to weak earnings.

Looking at some individual states, the chart on the top right shows Illinois had a 6.3% decline in spending, while Texas and Georgia had declines of 2.2% and 2.1%. It makes sense a Midwestern state is seeing the worst decline (out of the six listed) because that’s where the 3rd COVID-19 wave is the worst. Millennials/Gen Z have higher spending growth than Boomers because younger people are less at risk from the virus. Spending among Millennials/Gen Z in Texas is up 4.7%; spending is down 9.8% among Boomers in New York. States with low unemployment claims had a 4% decline and states with high claims had a 5.9% decline. 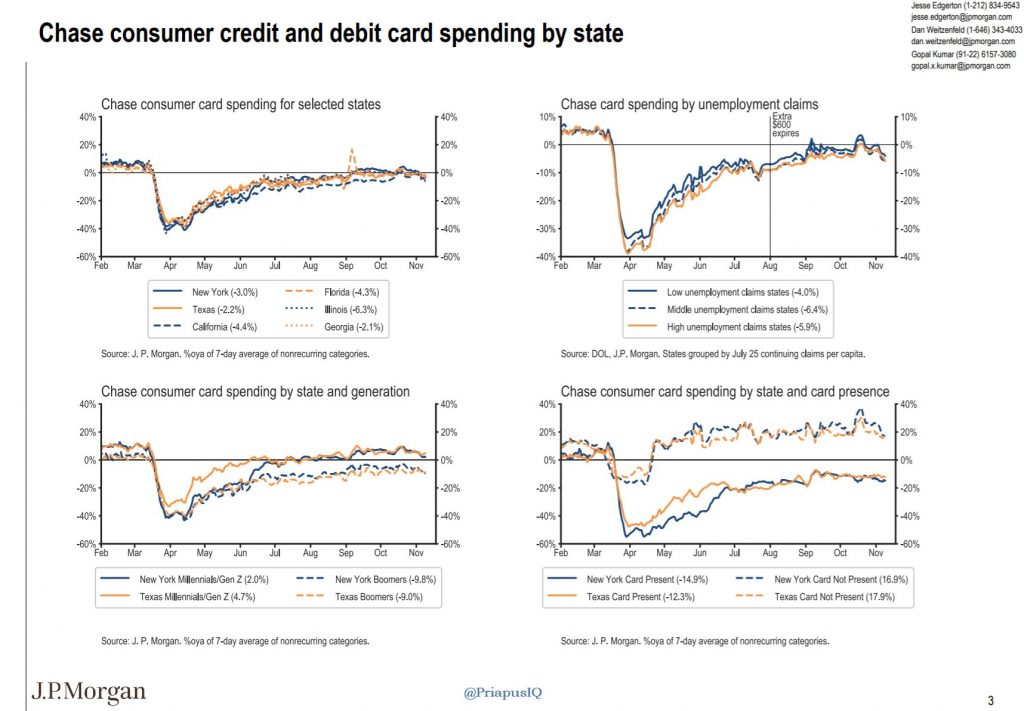 People are probably pulling back on spending more because of fear than from actual job loss. It makes sense to save money in such an uncertain time. To be clear, it is uncertain for consumers who might lose their jobs, their benefits, or get sick. Corporations are fine because they can easily weather one more bad quarter. The capital markets will give them money if they need it. That’s a different story for small businesses.

After a few months of waiting for weakness in consumer sentiment, we finally got it in the November University of Michigan preliminary report. We expected weakness starting in August when the extra jobless benefits expired. Instead, we got in November. You would think the weakness came from the spread of COVID-19, but it was largely because of the election.

The consumer sentiment index fell from 81.8 to 77 which missed estimates for 82 and the lowest estimate which was 80. As you can see from the chart above, Republicans became much less confident and Democrats became slightly less confident. The current index only fell 0.1 to 85.8. If recent rise in COVID-19 cases was hurting confidence, it would hurt the current index because people would be feeling the effects of the virus. This doesn’t jive with the Chase data.

The expectations index fell from 79.2 to 71.3 because Republicans are less optimistic about the future. The Democrats didn’t have a gain though because of worries about the virus. 59% of Democrats said their normal life changed because of COVID-19. 34% of Republicans said it did. The Democrats in the survey are more likely to become more negative because of the pandemic. There would have been less of a decline in confidence in the overall index if it wasn’t for the virus, but the election definitely played a bigger role in the weakness (because of the GOP).

In both Europe and America, the labor force participation rate fell more than it did after the financial crisis. In the financial crisis, women did better than men. More men work in finance, so that may have played a part in that. In this crisis, women have been hurt more because they are being forced to stay home with children who can’t go to school and because of layoffs in education where they are more likely to work. 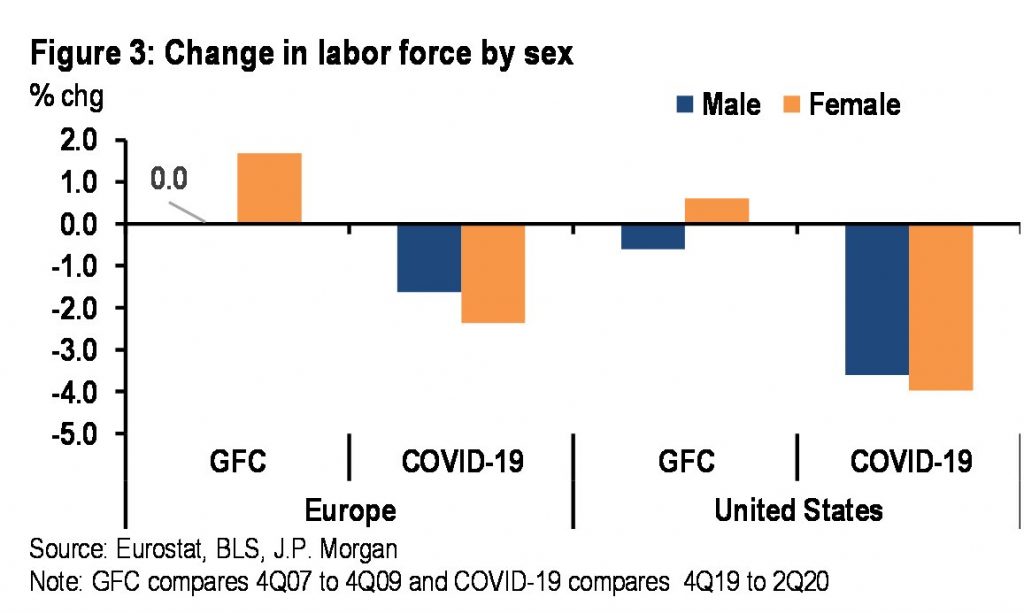 The stock market doesn’t care about the near term rise in virus cases because volatility comes because of fear/uncertainty and lack of liquidity, not temporary economic weakness. People sold stocks in March because of uncertainty. There is less uncertainty now because of the vaccine. However, consumers are struggling. They will have a very bad holiday season. Deaths are increasing and spending is starting to weaken according the Chase data. The consumer sentiment reading mostly fell because of the election, but some of the weakness came because of the pandemic. This crisis caused a much larger decline in the labor force participation rate than the GCF. It has been more damaging to women unlike the GCF.

My articlesMy books
Follow on:Twitter
Previous Velocity Of Money And The Glaciers Of Complacency
Next Mises And Freud: Another Heroic Misreading