Was This A Positive October Jobs Report?

by
Global Economic Intersection Analysis Blog Feed
My articles My booksMy videos
Follow on:Twitter
Summary:
Posted on 06 November 2019 by UPFINA Article of the Week from UPFINABoth the Markit manufacturing PMI and the ISM manufacturing PMI had weak October readings, but they improved. When these indexes go from weak to okay, that’s a great signal for stocks. That’s one of the reasons why the industrials sector rallied 2.18% (on Friday) and is very close to its January 2018 record high.Please share this article - Go to very top of page, right hand side, for social media buttons. The graphic below shows that when the ISM PMI is below 50.7 and the prices paid index is below 53.9, stocks perform the best.Historically, now is great time to buy stocks. The bearish counterpoint is stocks are up from when the downcycle started. Stocks fell in Q4 2018, but since then they have more than

Job Losses Are Back

Year Of The Gripping Hand

Both the Markit manufacturing PMI and the ISM manufacturing PMI had weak October readings, but they improved. When these indexes go from weak to okay, that’s a great signal for stocks. That’s one of the reasons why the industrials sector rallied 2.18% (on Friday) and is very close to its January 2018 record high.

The graphic below shows that when the ISM PMI is below 50.7 and the prices paid index is below 53.9, stocks perform the best.

Historically, now is great time to buy stocks. The bearish counterpoint is stocks are up from when the downcycle started. Stocks fell in Q4 2018, but since then they have more than recovered. The problem for bearish investors is it’s tough to bet against the cycle based on a valuation call. If the manufacturing sector really did bottom, the probability is that stocks go higher even with tepid economic growth.

The Markit manufacturing PMI improved from 51.1 to 51.3 which is a 6 month high. Both the new orders and production indexes hit 6 month highs. The new orders index has increased for 5 straight months. The backlogs index ended its 3 month decline streak as it was flat. Manufactures had the most confidence on 1 year output growth since June. The increase in new orders caused pre-production inventories to fall at the quickest rate in 3 months.

The report stated that “Firms noted that their clients were exhibiting less hesitancy in placing orders and market conditions had improved." The improved conditions were either cyclical or because of confidence about the potential trade deal. The comments section stated, “Tentative signs of renewed vigor are appearing in the US manufacturing sector, with the survey’s production gauge having now risen for three successive months to suggest that the soft patch bottomed out in July." The recently bearish Markit report suggesting a bottom occurred is amazing news.

As anticipated by the regional Fed manufacturing reports, the ISM PMI improved. It went from 47.8 to 48.3 which is consistent with 1.6% GDP growth. It missed estimates for 49.3. It wasn’t a good reading, but it showed some green shoots. The new orders index rose 1.8 points to 49.1 which still signals a contraction. 5 of 18 industries had new orders increase.

The production index fell 1.1 to 46.2. Even with the GM strike, the employment reading increased 1.4 to 47.7. The export orders index rallied 9.4 points to 50.4 and the imports index fell from 48.1 to 45.3. The prices index fell 4.2 points to 45.5. Three of ten firms mentioned tariffs or the trade war in the comments section. A computer & electronic parts firm stated, “Customer demand is down, and we are expecting a very soft fourth quarter, without much relief in sight for Q1."

As you can see from the chart below, there were 36,000 jobs lost in manufacturing. 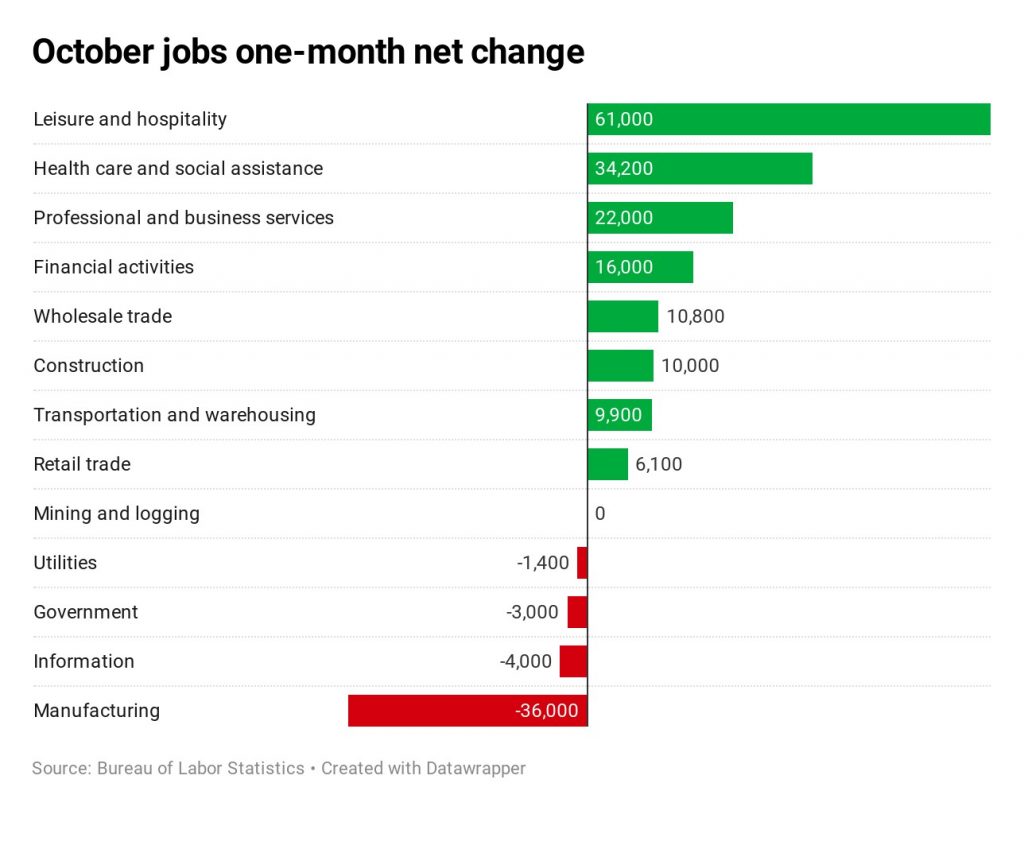 The biggest criticism of this report is it was boosted by leisure and hospitality which is the lowest paying industry. This industry was responsible for 46.6% of job creation in October. You can see in the chart below, leisure & hospitality jobs only pay $16.69 per hour. The all-important education and health services industry pays slightly less than the average of $28.18.

To be fair about the criticism of leisure and hospitality creating a high percentage of jobs in October, the percentage would have been less if it wasn’t for the GM strike. If there would have been 170,000 jobs created, the industry would have created 35.9% of the jobs. In the last 3 months, this industry has added 154,000 jobs. As you can see from the chart below, the 3 month annualized growth rate is 3.7%.

Maybe We Are At Full Employment

The labor force participation rose from 63.2% to 63.3% which beat estimates by 0.2%. That’s the highest rate since August 2013. The prime age labor force participation rate rose from 82.6% to 82.8% which is the highest rate since August 2009. This matches the expansion high. As you can see from the chart below, the demographically adjusted employment to population ratio has reached the 1999-2000 average. This implies the labor force is near full employment.

Average hourly wage growth in September was revised up 0.1% to 3%. October’s wage growth was the same as this revised reading. That’s actually a really nice improvement in the 2 year growth stack because growth improved sharply last October. The 2 year stack went from 5.98% to 6.36%. Weekly wage growth changed about the same because the length of the work week was steady at 34.4 hours. Average weekly wage growth was 2.74%. That’s off the cycle peak of 3.63%, but inflation is also down, so it’s not as much of a problem for real wage growth. The October CPI report comes out on November 13th. Low wage workers continue to have the highest wage growth as production and non-supervisory wage growth was 3.49%.

The manufacturing PMIs were weak and improved modestly. This could be the start of something great for stocks because when data goes from bad to okay, it’s a huge positive. Stocks do better when the ISM PMI is weak. The October jobs report was really good because of the positive revisions and the estimate beat. Job growth would have been even better without the GM strike. The biggest criticism of this report is too high of a percentage of job creation came from leisure and hospitality.

My articlesMy books
Follow on:Twitter
Previous Negative Interest Rate Policy And The Bank Lending Channel
Next The CAPM And The Non-Ergodic Axiom